Oli and I were watching a baby music DVD today and he started 'dancing'...I caught some of it!

Well the last month Oli has been waking a ton more at night to eat, but it hasn't been for nothing...He now weighs 16 pounds, 7 ounces - he gained two pounds in one month! He had been gaining about one pound a month.
Posted by just a mama... at 5:04 PM No comments: 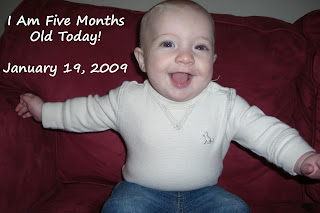 Already! Wow time has flown by! Oli is getting so big! He has immunizations tomorrow so I'll get his weight stats then. But he's definitely getting chunkier. His thighs have cute baby rolls, and look at his belly in this photo! He's getting long, too. All his 6 month long-sleeve shirts are too short for him already!
Posted by just a mama... at 2:03 PM No comments:

Oli has officially figured out his jumperoo. Here's a video of his first real bounces. He's got it down so good now that I'm afraid he's going to slingshot himself to the ceiling!

Ian spotted Oli rolling from his back to tummy this morning.
That means he can roll both ways now.
That means trouble! Better start really babyproofing the house - or at least the floor!
Posted by just a mama... at 8:48 AM No comments:

On Saturday, December 27th, we had to say goodbye to our 'puppy', Brick. We rescued him from the Animal Rescue League (www.arl-iowa.org) just over two years ago, when we first moved into our house. I went to the ARL to look at a chihuahua, and instantly fell in love with this big sweetie. He was a stray, so we had no idea what his behavior would be like but we just had to take him home.
Turns out he was the perfect dog. He was so well behaved and sweet - sometimes too sweet, he once let a few random strangers into the house!
This past August, a week before Oliver's due date, I took him to the vet to check out a small lump on his leg. Turns out it was bone cancer. It was already eating through his leg bone and had probably already spread. We didn't really have any options besides to love him as much as we could and keep him as comfortable as possible. He slowly got worse, and by the beginning of December he was not leaving the living room, because he slid around too much on the tile in the kitchen and hallway. The week of Christmas, he was crying a lot, having a hard time sitting/lying down, and the snow was really hard on him. We decided it was time...What a hard thing to do. We are happy that we rescued him and believe we gave him a great last two years of his life. We will always remember Brick! 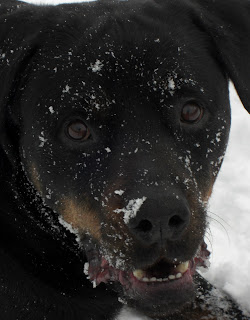 Brick cuddling with Ian and Oli on one of his last days. 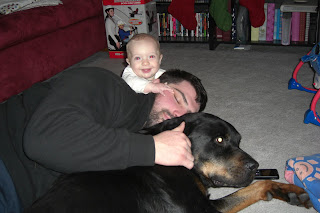 Playing in the snow last winter - he LOVED his basketball! 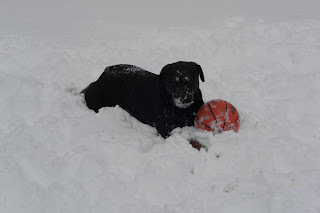 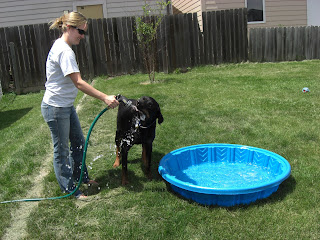 You can see the cancer on his left leg - it had gotten huge. 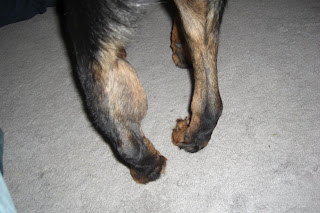 There is definitely a void in our house now, and we started talking about getting a puppy in late spring or early summer. But, I thought about it and Oliver will be crawling around that time, and I think it would be hard to chase a baby AND a puppy around!
We really wanted another Rott, but loved adopting Brick. So I looked into the MidAmerica Rottweiler Rescue (www.adoptarott.org) and we applied to adopt an 8 month old female Rott/Boxer mix. She's adorable, and we are pretty sure we will be adopting her in the next couple of weeks. She is currently in a 'foster home' so hopefully she'll be at least partly house broken and will have started some training. It will probably be a little crazy at first with the two babies, but we are excited.
So we had a sad end to 2008/start to 2009, but we are sure things will get better.
I hope everyone had wonderful holidays!