With every wire and monitor that comes off, Oliver keeps getting cuter and cuter! 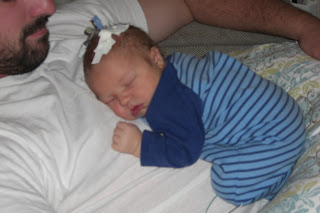 On the left of the page is a list of links, including links to lots of photos of Oliver. Check them out!

The end is in sight!
Due to a high fever (an infection somewhere, they aren't sure where or why), I have been hooked up to IV antibiotics since Thursday night. So Oliver and I have learned quickly how to untangle ourselves and move around without tripping over wires and cords!
It has been a rough weekend, but things are definitely looking up. I am getting my last dose of antibiotics right now, and will be discharged this afternoon. I'm looking forward to a quick trip home, my own shower, and then coming back to the NICU.
Oliver is doing so well - he's a tough guy. The only things he is hooked up to now are his IV - which is a saline lock when he's not getting his meds - and his heartrate monitor. He lost his bubble, oxygen monitor, and feeding tube. He just keeps getting cuter! He is eating well, his last antibiotic dose is due Wednesday morning, and he should be out of here that day! We are so excited. I'm looking forward to doing things on our own schedule, sleeping (haha) in my own bed, and mostly just hanging out on the couch as a family. It has been a loooong week!
I will work on uploading more photos soon! Below is a photo of him over the weekend, but he still has the feeding tube in. He is SUCH a cuddle bug!! 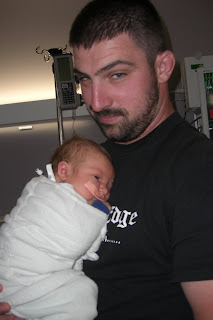 I woke up this morning (finally got a few hours of sleep! yay!) and went to see Oliver in the NICU, and got the best birthday present: Oliver was off oxygen! We thought it would take quite a bit longer.
All of his vitals have been stable now and the doctor is pretty confident that as soon as the antibiotics are done, he'll be sent home! All the nurses say they can't believe he's sick - he is quite the screamer for having lung problems!
And even better news was that he can now eat - he went about 24 hours with no food at all. We are working on breastfeeding, but it's pretty hard right now with everything else he's going through. So he also has a feeding tube that we can feed him with - it's just a tiny tube that goes in his mouth and down into his tummy. He can't even feel it now.
So hopefully the next week will be uneventful and Oli will be at home very soon.
Thank you for all your thoughts and encouraging words!
Posted by just a mama... at 10:52 PM 1 comment:

Well Oliver is doing pretty well in the NICU. He is currently under an oxygen dome (his 'bubble') but they are weaning him off of it slowly, and he is doing much better than they thought he would so soon. He will be on IV antibiotics for 7 days, but hopefully as soon as he is well enough to be out of the bubble we will be able to hold him again.
For those of you who are interested, I'll give his birth story (brief edition): On Monday he was 12 days overdue, so we went in for an ultrasound and non-stress test. He was doing well but my midwife decided he needed to come very soon. We went to the hospital Monday evening and I was given Cervadil to hopefully get some dilation started. I tried to sleep, and got a few hours, but my water broke at 4am and contractions started getting stronger. They weren't consistant enough however, so I was started on Pitocin at 10:30 Tuesday morning. Long story short, I labored until about 10:35pm, started pushing, and he was born at 11:27pm! He passed meconium shortly before delivery and swallowed some, so he was rushed to the warming table to be suctioned - poor guy was NOT happy about all of that. They gave him back to me, but he was 'grunting' a lot so they took him back to suction more. I finally got to hold him for good about half an hour after he was born.
He had a quick visit from some family members, and we tried to get some rest overnight. About 9:30 Wednesday morning, the nurses checking on him noticed that he had started breathing really rapidly. They took him to the nursery to run some test, and determined that he had pneumonia. They can't tell exactly why he got it, but it could have been due to the length of time between when my water broke and when he was born. He went straight to NICU and is in his 'bubble'.
He is doing well though, but it's hard to see him laying there and not be able to pick him up. We're just praying that he continues to do well.
Here are a couple photos, and you can go to two websites to see a lot more: http://www.facebook.com/album.php?aid=2049146&l=ed2ea&id=34004988 and http://www.facebook.com/album.php?aid=2049147&l=8ae30&id=34004988 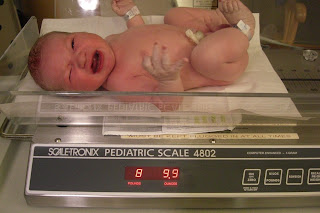 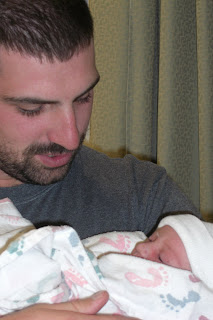 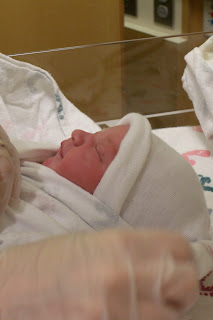 Just a very quick update!
Oliver Vernon Tice was born at 11:27pm on Tuesday, August 19th - 13 days past his due date! He was 8lbs, 10oz and 21 inches long.
Unfortunately, at less than 12 hours old, he was taken to the NICU with pneumonia. They are planning on keeping him on IV antibiotics for at least 7 days and if he's doing good then he'll get to go home! Please keep him in your thoughts and prayers.
I will be posting his birth story, photos, and updates soon.
Posted by just a mama... at 2:47 PM 3 comments:

No baby yet! He is being pretty lazy. I am praying he will be ready to arrive soon. Otherwise they will be inducing me next week sometime. Either way, it's pretty crazy to think that in a week or less, we will be able to hold our little boy!!
Posted by just a mama... at 9:37 PM No comments:

One year ago today... 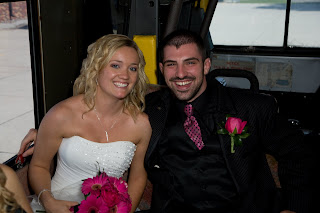 Happy Anniversary to us! I can't believe it's been a year already - it has flown by. Well, except for the last couple weeks of course! We were really hoping to have a baby to play with by now, so we haven't made any exciting plans to celebrate. I think the best anniversary gift we could get would be to go into labor today....cross your fingers!! :)

Well today is my due date, but I don't think Oliver really cares. He's way too comfy in there. He has up to two more weeks to arrive on his own, or else he'll be evicted! But, I still feel really great so I think I can be patient a little longer.
Due date photo - 8/6/08 (Austin has been smudging up the mirror!) 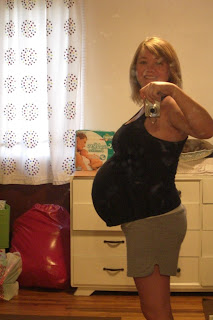