Oliver and I went up to Miller Park today to meet Kim, Austin, Anna, Mallory, and Elise. It was a bit colder than I thought it would be, but we had fun. I put Oliver on one of the landings on the playground, and he immediately began climbing the steps!! He went up six or seven of them without me even touching him! He's getting so big! 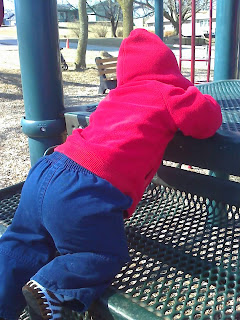